What a crazy night at "THE HILL"! We had a little bit of everything going on saturday night! From dusty conditions in warm-ups, to high blowin' winds, to bangin' and crashin', to flippin', to a new winner in 2 of the feature events, to passing 2 cars on the last turn to win, to a Full Moon, to an overall good entertaining LONG night! I'm gonna blame alot of the crazed events that took place on the Full Moon! It was definitely a night for the safety glasses not only to keep the dirt out of your eyes, but the wind was just nasty! Alot of good racing action took place in all 3 divisions! I myself am NOT a fan of a 3 division show and never will be! I enjoy all 3 types of cars, but not on the same night! It takes waaaay too long to run the show and slims the chances of going pitside after the races are over! Really glad my daughter was not along! Toooo long for kids!
I love watching the ARDC midgets in action! Drew Heistand seemed to be in total control of the feature till late in the race. I really enjoy watching Steve "Royersford Rocket" Buckwalter in action! He is incredible how he moves through the field! Billy "looks like his mother but drives like his father" Pauch Jr also had that #54 lit-up and working his way through the field! Buckwalter got by Heistand on a late race restart and I thought it was over! On the final lap, Heistand went into turn 3 super-hot and got inside Buckwalter and they both drifted up the track into turn 4! Pauchy Jr drove under both of them to win his first ARDC feature in dramatic style! It was AWESOME!
The modifieds had a rubbered up track come feature time that was tough to get ahold of! It seemed to be a finesse track and finding the right line or groove that was best for the set-up you had on the car! Jon Kellner Jr was hooked-up! He led every lap of the feature to gain his first ever modified feature win! He did have some pressure from Ryan Godown and Doug Hoffman was also right there! Pauchy Jr had another strong run coming home 4th! Doug Manmiller rounded out the top 5! The BIG 3 really didnt show too much strength. Howard brought home a 7th, while Von Dohren finished 12th (after pitting) and Strunk was 13th. Brad Missimer after a super run last week, snap rolled the #327 4-5 times violently. Glad to see Brad was ok! Ryan Grim was also a flip victim catching the inside yuke tire in turns 1-2 and going over!
Chuck Schutz took home the win in the Late Models in roaring fashion! John Favinger continues to impress finishing 2nd! Nice job! Man, he caught on quick! Stoudt, Shuey and Henning rounded out the top 5!
SIDE NOTES: Glad to see Danny Erb added the Cowpatty Nation sticker to the front of the #44! Thanks Danny! I thought our own Doug "Fire Marshall" Ayres was gonna get some work when Shawn Reimerts car just erupted in flames! Doug said he was ready, but Shawn cruised right by him on the homestretch! Shawn did get out and check the fuel cap, and it was still on? GREAT to finally meet the one and only Diamond Dog! I am sure glad we did! An amazing man with great spirit and positivity and an excellent ambassador for the sport we love!!! Eric and I had a great time meeting up with you and hope to do it again sometime real soon! I loved that you were quick to get that shirt on...PRICELESS! Thanks again on the kind words about the website and the Cowpatty gear! Good friends Jim and Matt Ritter were up in CPN territory on saturday night and it was alot fun seeing and hanging out with you guys! Lookin' sporty in those CPN shirts! Jim while attempting to take his cell phone out of his pocket, fumbled it from the top row of the bleachers and fell all the way to the ground below!! Jim found the phone open and lit and NO DAMAGE! Unbelievable! Racing concluded at midnite and we called it a night!
Till next week...keep on Cowpattying!
Posted by BVT at 3:27 PM 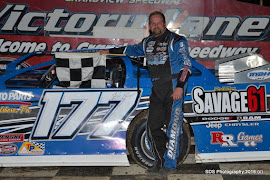