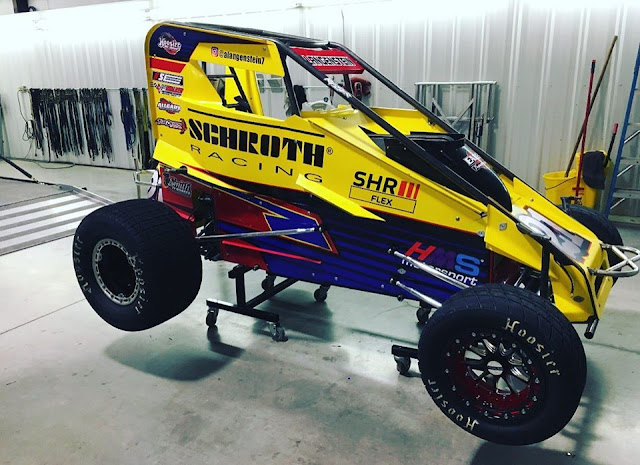 TULSA, Okla. – Team Ripper Racing has added Austin Langenstein to its roster for the upcoming Lucas Oil Chili Bowl Nationals, Jan. 13-18 inside the River Spirit Expo Center.
Langenstein is a part-time racer and full-time safety advocate and salesman within the motorsports realm, working out of the Mooresville, N.C., branch of Massachusetts-based HMS Motorsport.
The 23-year-old made his Chili Bowl debut with Tucker-Boat Motorsports in 2018, cracking the A-main on his preliminary night and finishing in the E-main during the Saturday finale.
After a year’s layoff from what he calls one of his “absolute favorite events,” Langenstein is eager to return to Oklahoma in two weeks’ time for his second appearance at the Super Bowl of Midget Racing.
“My Chili Bowl debut in 2018 was a dream come true, and it’s hard to believe I’ll be able to relive it in a few weeks,” Langenstein said. “This deal actually started with a conversation between myself, Tom Meyers of Schroth Racing and Joe Marko, my boss at HMS. We’ll have a booth at the Chili Bowl trade show again this year so that when I’m not racing, I can be pushing safety again when I’m not in the car.
“Once we got the little details worked out as to how all that would work together with me being back in a Chili Bowl ride, I reached out to Flea (Ruzic, Team Ripper’s crew chief) to ask if he had a ride available still and can’t thank him and (car owner) Steve Reynolds enough for accommodating me.”
Though he’s been focused mostly on his business duties for the past two years, Langenstein has found his way back into a race car when time allows, including a dirt modified appearance at the World Finals at The Dirt Track at Charlotte in November of 2018.
He hasn’t been in a midget recently, but Langenstein confirmed he’s been undertaking every preparation he can to get ready for his return to the high-powered dirt open wheel cars.
“I’ve been watching a ton of film and studying the videos from last year’s Chili Bowl, just doing whatever I can to gain knowledge and get ready for next month,” Langenstein explained. “Honestly, I feel like I’ve never been more prepared to get back behind the wheel than I am right now and I’m looking forward to making the most of this opportunity.
“I know Flea and the guys will give me a fast No. 21k Schroth Racing midget, so it’s up to me to do all I can with it when we get down to Tulsa and get on the race track.”
Ruzic is looking forward to working with Langenstein and noted that the Scranton, Pa., native is the type of driver he enjoys being able to give an opportunity to.
“I’d heard about Austin, but I’d never really met him until recently, and when I finally got to meet Austin, it’s funny because I thought he was European,” Ruzic recalled. “He had a real heavy, like an English accent, so I asked him where he was from … expecting maybe Britain or something, and when he said he was from the Northeast, up near Pennsylvania and New York, I was a bit surprised.
“But I think the fact that he actually hops into a little bit of everything, between modifieds and go-karts, all that stuff … and how he worked up through the ranks will help him with us,” Ruzic added. “He’s used to adapting to his equipment and he showed well at the Chili Bowl a couple years ago, so when he came to me and said he wanted to try it again, I had a car for him and figured let’s make dreams come true.”
Despite his relative inexperience compared to others at the Chili Bowl, Langenstein plans to lean on his past racing history and believes he’ll have a shot at big things during the week-long affair.
“Last time I raced at the Chili Bowl, I had never even sat in a midget until the Monday practice night,” Langenstein said. “And even in spite of that, we made the E-main, which is way further up than I thought I’d be in my first start there, if I’m being honest. My goals this year are to improve on that, make the feature on my preliminary night and ultimately to have a realistic shot of making the big show on Saturday.
“Driving the modifieds and I-mods back in the day in the Northeast really prepared me well, I think, for the power-to-weight ratio of the midgets and I feel right at home in them,” he added. “Hopefully it serves us and we can go out and leave our mark in Tulsa. I’m really looking forward to this.”