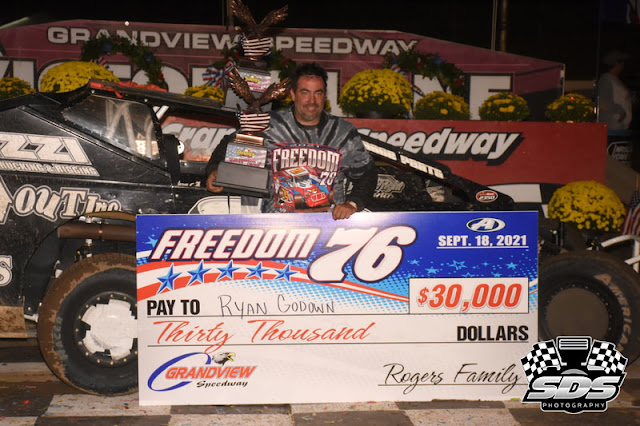 BECHTELSVILLE, PA. – Ryan “The Ringoes Rocket” Godown invaded the 1/3-mile clay high banks of Grandview Speedway on Saturday night to be one of the 67 drivers participating in qualifying events for the 51st Annual Freedom 76-lap Modified feature.

The decision to travel from New Jersey was a profitable one for the 2021 Bridgeport Motorsports Park Modified point champion. Godown outgunned leader and last year’s winner Jeff Strunk, who was vying for his ninth victory in the prestigious event, on the 52nd lap restart and was able to continue the momentum until he pulled into victory lane for a $30,000 plus payday which was his first ever triumph in the race. He earned lap money, a Bob Hilbert Sportswear jacket, in addition to the Lynn Himes Great Effort award worth $100 for being the highest finishing driver not in the top 10 in Grandview points. Standing in victory lane he commented he couldn’t believe he was standing there and that he just kept plugging on the bottom knowing Strunk was behind him.

Following a top three engine tech after the race that included Godown, Strunk and Timmy Buckwalter everyone received a clean slate.

Through the luck of the draw, guaranteed starter for finishing second to 2021 Grandview NASCAR Modified point champion Craig Von Dohren, Tim Buckwalter started on the pole in the Saxton Motorsports No. 23X. He wasted no time in taking off on the start and soon began to pull away from fellow competitors Jordan Henn, Ryan Krachun, Dylan Swinehart and Frank Cozze.

Buckwalter’s sizeable lead was erased by Ron Haring Jr. when he brought out the first yellow on the 13th lap after stopping in turn two. Buckwalter continued the pace when action resumed, but by now Krachun and Cozze were putting the pressure on him.

The yellow was out again on lap 24 when Meme DeSantis spun in the third turn. The front of the pace was approaching. Buckwalter and Krachun avoided him, but Cozze, who was third and Brett Kressley, who had just moved into sixth, weren’t as fortunate. DeSantis and Cozze went off on the hook. Kressley drove away under his own power and went pit side never to return to action. On the restart Strunk, while fourth, swept to the outside and in a daring move and was now the new leader being pursued by Buckwalter, Godown, Krachun and Duane Howard.

Godown overtook second on the 27th lap and set his sights and goal at passing Strunk.

Once again the pack was regrouped when Davey Sammons stopped in the second turn backstretch apron. Strunk wasted no time pulling away since he knew Godown was just waiting for the right opportunity to pass him and cross the win off his bucket list.

The red had to be thrown on the 47th lap following a homestretch accident that blocked the track. Before the race went green again, Manmiller, while running fifth, had to make a pit stop with a flat tire. He rejoined the race in the rear, but was only able to get up to 11th. On the restart Strunk kept Godown behind him, but Godown stayed right with him and didn’t give up.

Cole Stangle brought out the final yellow when he stopped in the second turn with a flat tire. This restart saw Godown charge past Strunk into first.

While Godown showed the way now Strunk, Buckwalter, Howard and Krachun tried to chase him down.

Lapped traffic entered the picture once again on the 63rd lap and this allowed the second  through fifth place drivers to reel Godown in, but they couldn’t get the job done and Godown went on to claim the victory. Finishing second was Strunk trailed by Buckwalter, Howard and Krachun. Sixth through tenth were Ryan Grim, Craig Von Dohren, Billy Pauch Jr., and Dillon Steuer. Manmiller received the Bobby Gunther Walsh Sponsor’s Hard Charger award worth $760. He gained 20 positions as he went from the 34th starting spot to 11th.

Qualifying through the Minuteman 20 to get into the Freedom 76 were Mike Gular, Davey Sammons, Danny Bouc, Manmiller and Varin.

The winner of the GT Radiator Repairs Cash Dash worth $1,000 was Brett Kressley. 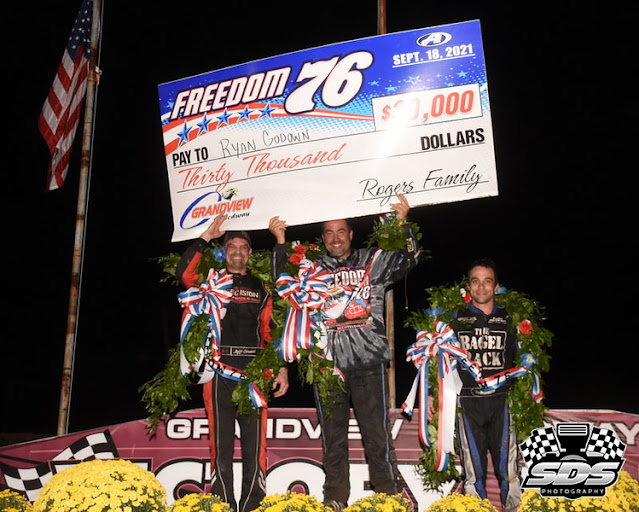